Sydney Trains is the suburban commuter rail network serving the Australian city of Sydney, New South Wales. The network consists of surface lines in the suburbs, most of which feed underground lines in the central core. Its nine lines serve 175 stations. The network is controlled by the New South Wales Government's transport authority, Transport for NSW, and is part of the authority's Opal fare system. Day-to-day operation of the network is contracted to an eponymously named organisation also owned by the New South Wales Government. In 2017-18, 359.2 million passenger journeys were made on the network.

In May 2012, the New South Wales Government announced a restructure of RailCorp, the organisation that owned and managed the metropolitan rail network and operated passenger services throughout the New South Wales.[1][2][3][4] Two new organisations were created to take over operation of the services from 1 July 2013. Sydney Trains acquired all suburban services in the Sydney metropolitan area bounded by Berowra, Emu Plains, Macarthur and Waterfall from RailCorp's CityRail division. Intercity and Hunter Line services previously operated by CityRail were taken over by NSW Trains (branded as NSW TrainLink).[5] RailCorp remained as the owner of the network infrastructure.

The first expansion of the Sydney suburban network during the Sydney Trains era occurred in 2015 when the South West Rail Link opened between Glenfield and Leppington.

Beginning in 2018, some sections of the network are being transferred to the city’s metro and light rail networks. Two sections are being transferred to what is currently known as the Metro North West Line. The line between Chatswood and Epping was converted to metro as part of the Sydney Metro Northwest project and closed for conversion in September 2018.[6] The section of line between Sydenham and Bankstown will be converted as part of Sydney Metro City & Southwest. This extension to the Metro North West Line is due to open in 2024.[7] The section of line between Camellia and Carlingford will form part of the Parramatta Light Rail network.[8] The adjacent section of track between Clyde and Camellia, including Rosehill station, will become disused.[9] The Carlingford line will close in January 2020.[10] The light rail is expected to open in 2023.[8]

In addition to operating suburban train services, Sydney Trains maintains the New South Wales Metropolitan Rail Area, and maintains all but a handful of operational railway stations in the state.

In conjunction with a new timetable released on 20 October 2013, the Sydney Trains network was reorganised with a new numbering system. The number of lines was reduced from eleven to seven by merging several lines together. Over the next few years, some of these mergers were wound back. By 2019 the network had increased to nine lines.[11][12][13]

The main hub of the Sydney Trains system is Central station, which most lines pass through. Central is also the terminus of most NSW TrainLink lines. After leaving Central, trains coming from the T2 Inner West & Leppington Line, T3 Bankstown Line and T8 Airport & South Line then travel through the City Circle - a ring line beneath the Sydney central business district. After completing the City Circle, these trains pass through Central for a second time and return to the suburbs. The T1 North Shore & Western Line, T4 Eastern Suburbs & Illawarra Line and T9 Northern Line pass through the central business district and continue on to other areas of Sydney. The T5 Cumberland Line serves Western Sydney and provides access to the major centre of Parramatta from the south west of the city without requiring a change of trains at Granville. The T6 Carlingford Line and T7 Olympic Park Line are suburban shuttle services.

NightRide bus services established in 1989, replace trains between midnight and 4:30am, leaving the tracks clear of trains for maintenance work. Such bus services mainly stop near stations operating typically at hourly intervals (some routes depart more frequently on weekends). Many services depart the city from bus stops near Town Hall station.[14] NightRide services are contracted to external bus operators and are identified by route numbers beginning with "N".

Sydney Trains operates a fleet of double deck electric multiple units. The trainsets are divided into the following classes: 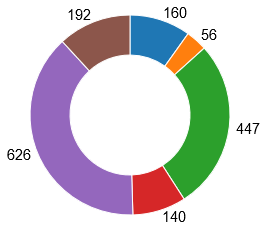 Though primarily operated by NSW TrainLink, some H sets are also used on suburban services. The Sydney Trains network is divided into three sectors, based around three maintenance depots.[15] Trainsets are identified by target plates, which are exhibited on the front lower nearside of driving carriages.[16] Each target plate includes the letter of the class the set belongs to and the number of the individual set. Waratahs do not have a target plate, but instead, have the information written directly on the front of the train. The composition and formations of train sets and the target designations are subject to alteration. Sydney Trains also maintains intercity trains for NSW TrainLink.[17]

Sydney Trains currently uses the Opal fare system which was introduced to the network in April 2014.[24] The fare system is fully integrated with the NSW TrainLink Intercity and Sydney Metro networks - trips involving both suburban and intercity services or train and metro travel are calculated as a single fare and there is no interchange penalty.[25] A surcharge is levied when using the two privately operated stations serving Sydney Airport. As there are no return or periodical options available, reusable Opal cards include a number of caps to reduce the cost for frequent travellers. Opal is also valid on bus, ferry and light rail services but separate fares apply for these modes. The following table lists Opal fares for reusable smartcards and single trip tickets as of 24 June 2019:[26]

The previous ticketing system was introduced in 1992 and was based on magnetic stripe technology. It was shut down on 1 August 2016.[27]

This article incorporates text from the following revision of the English Wikipedia article "Sydney Trains": https://en.wikipedia.org/w/index.php?title=Sydney_Trains&oldid=884319578.