Sydney Metro Greater West is a proposed metro line in Sydney, New South Wales, Australia, initially running between the St Marys suburban railway station and "Badgerys Creek Aerotropolis" - a development area to the south of Western Sydney Airport. Planning for the line is at an extremely early stage. The line is expected to open in time for the airport's opening in 2026. It will form part of the Sydney Metro system.

A scoping study into rail investment to service Western Sydney and the proposed Western Sydney Airport was announced by the New South Wales and Australian governments in November 2015.[1] A discussion paper was released in September 2016. The paper proposed various options that could provide a rail link to the airport, some of which were proposed as or were likely to be built as metro lines. The metro options were:[2]

The study's final report was released in March 2018. It proposed two new lines to ultimately service the Western Sydney airport precinct: a "North-South Link" from Schofields to Macarthur and an "East-West Link" from Parramatta to the "Badgerys Creek Aerotropolis" - an area south of the airport. The report suggested "a metro or light metro style of train would suit the North-South Link".[3] 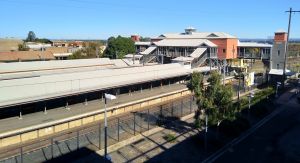 St Marys station would be the initial northern terminus of the line and would offer a connection to the rest of the rail network.

By August, the New South Wales government announced the line would be "developed and delivered by Sydney Metro" and started referring the project as Sydney Metro Western Sydney Airport.[6][7][8] In early 2019 the name of the project was changed to Sydney Metro Greater West. [9]

During the 2019 New South Wales election campaign, the governing Liberal Party announced it would commence planning of two extensions to the line; northwest from St Marys to Rouse Hill and south from Badgerys Creek Aerotropolis to Macarthur.[10] This would complete the North-South Link as envisaged in the 2018 report and would connect to the Metro North West Line at Rouse Hill.

This article incorporates text from the following revision of the English Wikipedia article "Sydney Metro": https://en.wikipedia.org/w/index.php?title=Sydney_Metro&oldid=881055615.