Central station is a railway and future metro station located at the southern end of the central business district in Sydney, New South Wales, Australia. The station is the largest and busiest railway station in New South Wales. It services almost all of the lines on the Sydney Trains network, and is the major terminus for NSW TrainLink services. From 2024, Sydney Metro services will also pass through the station. It recorded 11.35 million passenger movements in 2013.

Central station occupies a large city block separating Haymarket, Surry Hills, and the central business district, bounded by Railway Square and Pitt Street in the west, Eddy Avenue in the north, Elizabeth Street in the east and the Devonshire Street Tunnel in the south.

There have been three terminal stations in Sydney. The original Sydney station was opened on 26 September 1855 in an area known as Cleveland Fields. This station (one wooden platform in a corrugated iron shed), called Sydney Terminal, had Devonshire Street as its northern boundary.[1] It was frequently but unofficially called Redfern station,[2] while at that time the present Redfern station was officially called Eveleigh.[3] It should be noted that the first and second Sydney Terminals were never actually located in Redfern, being to the north of Cleveland Street which is Redfern's northern boundary.

When this station became inadequate for the traffic it carried, a new station was built in 1874 on the same site and also called Sydney Terminal. This was a brick building with two platforms. It grew to 14 platforms before it was replaced by the present-day station to the north of Devonshire Street. The new station was built on a site previously occupied by the Devonshire Street Cemetery,[4] a convent, a female refuge, a police barracks, a parsonage, and a Benevolent Society. The remains exhumed from the cemetery were re-interred at several other Sydney cemeteries including Rookwood and Waverley cemeteries. Bodies were moved to Botany by steam tram motors and flat cars.[1]

The present station was officially opened on 4 August 1906 and opening for passengers on 5 August 1906.[5] The new station included the previous Mortuary railway station used to transport funeral parties to Rookwood Cemetery.[6] The last train departed platform 5 of the 1874 station at midnight. During the remainder of that night, the passenger concourse was demolished and the line extended through the old station into the new station. The Western Mail arrived at 05:50 on 5 August 1906 at the new station.[7] A section of Devonshire Street, which separated the two stations, became a pedestrian underpass to allow people to cross the rail corridor and is known as the Devonshire Street Tunnel.[1]

An 85.6m-tall[1] clock tower in the Free Classical style was added at the north-western corner of the station, opening on 3 March 1921. Central station was designed by the Government Architect, Walter Liberty Vernon. As it was being built, it was reported that "Everything in connection with the new station appears to have been designed on a grand scale, from the great elevated approaches down to the system of handling luggage underground."[8] It is listed on the New South Wales State Heritage Register[9][6] and the now defunct Register of the National Estate.[10]

A riot, dubbed the Battle of Central Station, took place in 1916. Soldiers rebelling against camp conditions had raided hotels in Liverpool and travelled to the city by commandeered trains. Upon arrival at Central station, the rioters set about destroying the station facilities, and fire was exchanged between rampaging rioters and military police. One rioter was shot dead and several were injured. The only remaining evidence of the gun battle is a small bullet-hole in the marble by the entrance to platform 1.[11] This incident had a direct influence on the introduction of 6 o'clock closing of hotels in 1916, which lasted in New South Wales until 1955.[1]

The station opened on 5 August 1906 with 11 platforms, but was soon expanded to 15, and by 1913 had 19.[12] This section is dominated by a large vaulted roof over the concourse and elaborate masonry, primarily Sydney sandstone.

As part of the construction of the electrified city railway in the 1920s, a new Central station was built. The existing station was cut back to 15 platforms with new platforms 16 to 23 built on the station's eastern side and a six-track bridge paralleling Elizabeth Street to Goulburn Street built to the north.

Railway employees then referred to the main building and platforms 10 to 15 as Sydney Terminal Station and platforms 16 to 23, and the lower level concourse serving them, as Central Electric Station and the two stations were managed and staffed as separate entities.

South of these new platforms, a series of flying junctions were built. This involved the four southbound tracks passing beneath the northbound tracks with a series of diamond crossings allowing trains to cross lines without impeding trains travelling in the opposite direction.[12]

To the west of Platform 1 there was a siding leading to two dock platforms for use of mail trains, now cut back to serve a motorail loading ramp for the Indian Pacific. The space were where the mail sidings is now a youth hostel. The hostel rooms are modelled on old train carriages.[14]

The eastern ("suburban") part of the station, consists of 10 through platforms, all aligned north-south, two of which are underground. These are used by suburban Sydney Trains services and by a limited number of NSW TrainLink intercity services during peak hours. The eight above-ground platforms were opened in 1926 as part of a large electrification and modernisation program aimed at improving Sydney's suburban railway services. Prince Alfred sidings, south of Platform 23, were used to stable electric trains until closed in August 1995 and later demolished to make way for the Airport line.[18]

The two underground platforms were built as part of the Eastern Suburbs railway line. Construction commenced in 1948 but the line was not finished until 1979. While the plans called for four platforms, two (for the Southern Suburbs line) were intended to be used in the future and were used for archival storage by the railways. 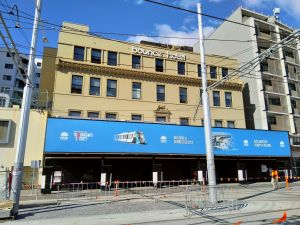 Demolition of the Bounce Hotel on Chalmers Street, opposite Central Station. The site will be redeveloped into a new entrance to the station as part of the Central Walk project.

A contract for a major upgrade of the station was awarded in March 2018. The work includes construction of two new underground platforms as part of the Sydney Metro City & Southwest project and a new underground concourse called Central Walk. The new platforms will be built beneath platforms 13-14.[19] In November and December 2018, platforms 12/13 and 14/15 were demolished. A temporary platform 12 opened in early 2019.[20]

Central is served by most Sydney Trains and NSW TrainLink Intercity lines. All long-distance NSW TrainLink Regional services and the Indian Pacific terminate at Central. These generally use Platforms 1 to 3.

The platforms are numbered from 1 to 25, with 1 being the westernmost platform and 25 being one of the easternmost. The services which generally use each platform are listed below:

Central is the eastern terminus of the Inner West Light Rail that operates to Dulwich Hill via Darling Harbour, Pyrmont and the inner western suburbs. The light rail stop is in an outside concourse area, near the main waiting area and departure hall. This area was originally designed for trams, and as such was used by the trams of Sydney's former network until 1958, when the service was withdrawn. It was known as Railway Colonnade. Light rail services operate in a clockwise direction, whereas the older trams operated in an anti-clockwise direction.

Construction of the CBD and South East Light Rail line from Circular Quay to Kingsford and Randwick via Central commenced in 2015.[23] Stops will be located at Rawson Place and on Chalmers Street.

After Central was built in 1906, the section of Devonshire Street to the north of the old station became an underpass known as the Devonshire Street Tunnel. The underpass allows pedestrians to access the eastern "suburban" section from Railway Square and Chalmers Street.[24] At the western end, the tunnel connects to The Goods Line–a park and pedestrian pathway to Ultimo and Darling Harbour.