The Metro North West Line is a metro rail line serving the north west suburbs in Sydney, New South Wales, Australia. The line is coloured teal on maps and informational material. It is the first line of the Sydney Metro network and is also Australia's first metro line. The line entered service on 26 May 2019. 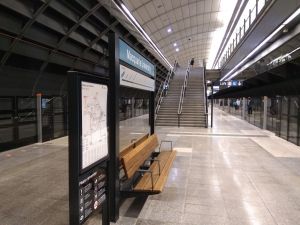 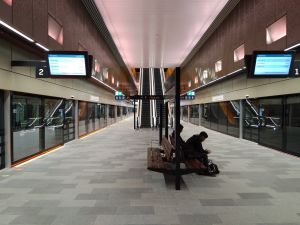 A railway line serving the car-dependant north west suburbs had been proposed for many years. The North West Rail Link was announced in the New South Wales Government's 1998 long-term transport plan Action for Transport 2010. Plans to construct the line were repeatedly announced but then cancelled. While most plans envisaged the line as a conventional railway using Sydney's standard double-deck trains, the line was eventually created as single-deck metro line. The project to construct the line, known as Sydney Metro Northwest, converted the Epping to Chatswood railway line to metro standards and extended it through the north west suburbs to Rouse Hill.

Sydney Metro Northwest opened on 26 May 2019. Services were branded as the Metro North West Line.[1] Trains were to run every five minutes during peak hours for first six weeks of operation, before expanding to run every four minutes; however, this change actually came into effect on 1 July.[2][3] Until late 2019, a replacement bus service will run every night from around 9.30pm between Sunday to Wednesday to allow additional works to be completed.[2][4][5] There were more than 1.8 million journeys on the line during the first month of operation. The government stated that 20,000 fewer cars had used the M2 motorway compared to the same time in 2018 and there had been up to a 20 percent fall in usage at key stations on the T1 Western Line. It attributed these changes to the opening of the metro.[6]

The eastern terminus of the line is at Chatswood. This means passengers travelling to the city are presently required to change to a T1 North Shore & Western Line or T9 Northern Line service to complete their journey. Sydney Metro City & Southwest is a project to construct a new tunnel to extend the metro line under Sydney Harbour, through the city and on to Sydenham. From there the metro will head west to Bankstown, taking over most of the Bankstown railway line. This extension is under construction and is due to open in 2024.

As of December 2011, the New South Wales Government had not ruled out the possibility of contracting the operation and management of the North West Rail Link to private enterprise as part of a public-private partnership. Les Wielinga, the Director-General of Transport for NSW, stated "We are focused on the longer term rail options. It's got to work as a single network, the whole network, but we are looking at private sector involvement in those as well. And we've got an open mind.".[7]

In May 2013 it was announced that two consortia had been shortlisted to operate the line:[8]

The Northwest Rapid Transit consortium was awarded the contract in June 2014.[9] The operator itself is known as Metro Trains Sydney.[10][11]

Early plans for the City & Southwest project envisaged a second phase of the southern sector conversion of existing railway lines. This would see two of the four Illawarra railway line tracks between Sydenham and Hurstville converted to rapid transit and added to the Sydney Metro network. This would increase rail capacity between Hurstville and the city by 10 trains per hour. Though a precise construction timeframe was not provided, the plan was for all work being completed by 2031. The Hurstville conversion would add eight stations and 9km to the metro network.[12] Developing plans for this extension proved difficult, and the Sydney Morning Herald reported in February 2016 that the project may have been dropped.[13] It was absent from the New South Wales Government's 2018 Greater Sydney Services and Infrastructure Plan which set out potential transport projects to be built through to 2056.

** As a metro station. * Most stations are served by connecting bus services. Some Sydney Trains stations may also be served by intercity trains at certain times.

Stage 1 operates with 6-car trains running on 4 minute headways. After the addition of the Stage 2 extension to Bankstown, the system will require at least 59 six-car trains to run every four minutes during peak periods. Station platforms are configured to allow for future use of 8-car trains and the signalling system designed to allow for 2 minute headways, both of which are planned to be introduced once sufficient patronage demands it. Eight-car trains have a design capacity of 1,539 passengers, and increasing the running frequency to ultimately 30 trains per hour (2 minute headway) would provide a maximum capacity of 46,170 passengers per hour per direction.[14]

There were long term plans to extend the proposed heavy-rail North West Rail Link to meet the existing Richmond railway line near Vineyard.[15] However, the location of the alignments were never finalised and further investigation and studies would have been required. The design of the line was subsequently extended south west to Tallawong, making an extension to Vineyard impractical.

State government documents from May 2011 suggested an intention to eventually extend the line to meet the Richmond line near Schofields, two stations south of Vineyard.[16] A government report from June of that year suggested an extension of the North West Rail Link beyond Rouse Hill to meet the Richmond line at Schofields, Riverstone, or beyond.[17]

A scoping study into rail investment to service Western Sydney and the proposed Western Sydney Airport was announced by the New South Wales and Australian governments in November 2015.[18] The study's final report was released in March 2018 and included a proposal to extend the Sydney Metro Northwest from Tallawong to Schofields, where it would connect with a proposed "North-South Link" (now known as Sydney Metro Greater West) serving the airport and continuing on to Macarthur.[19] An announcement by the governing Liberal Party during the 2019 New South Wales election campaign suggested the route would instead form part of Sydney Metro Greater West, meaning the two metros would meet at Rouse Hill rather than Schofields.[20]

During the 2019 New South Wales election campaign, the governing Liberal Party announced it would commence planning of this extension.[20]