The World Health Organization (WHO) is a specialized agency of the United Nations (UN) that acts as a coordinating authority on international public health. Established on 7 April 1948, and headquartered in Geneva, Switzerland, the agency inherited the mandate and resources of its predecessor, the Health Organization, which had been an agency of the League of Nations.

The WHO's constitution states that its objective "is the attainment by all peoples of the highest possible level of health."[1] Its major task is to combat disease, especially key infectious diseases, and to promote the general health of the people of the world.

The World Health Organization (WHO) is one of the original agencies of the United Nations, its constitution formally coming into force on the first World Health Day, (7 April 1948), when it was ratified by the 26th member state.[2] Prior to this its operations, as well as the remaining activities of the League of Nations Health Organization, were under the control of an Interim Commission following an International Health Conference in the summer of 1946.[3] The transfer was authorized by a Resolution of the General Assembly.[4] The epidemiological service of the French Office International d'Hygiène Publique was incorporated into the Interim Commission of the World Health Organization on 1 January 1947.[5]

As well as coordinating international efforts to monitor outbreaks of infectious diseases, such as SARS, malaria, swine flu, and AIDS the WHO also sponsors programs to prevent and treat such diseases. The WHO supports the development and distribution of safe and effective vaccines, pharmaceutical diagnostics, and drugs. After over 2 decades of fighting smallpox, the WHO declared in 1980 that the disease had been eradicated - the first disease in history to be eliminated by human effort.

The WHO aims to eradicate polio within the next few years. The organization has already endorsed the world's first official HIV/AIDS Toolkit for Zimbabwe (from 3 October 2006), making it an international standard.[6]

In addition to its work in eradicating disease, the WHO also carries out various health-related campaigns — for example, to boost the consumption of fruits and vegetables worldwide and to discourage tobacco use.

Experts met at the WHO headquarters in Geneva in February, 2007, and reported that their work on pandemic influenza vaccine development had achieved encouraging progress. More than 40 clinical trials have been completed or are ongoing. Most have focused on healthy adults. Some companies, after completing safety analyses in adults, have initiated clinical trials in the elderly and in children. All vaccines so far appear to be safe and well-tolerated in all age groups tested.[7]

The WHO also conducts research; for example, whether the electromagnetic field surrounding cell phones has an impact on health. Some of this work can be controversial, as illustrated by the April, 2003, joint WHO/FAO report, which recommended that sugar should form no more than 10% of a healthy diet. This report led to lobbying by the sugar industry against the recommendation[8], to which the WHO/FAO responded by including in the report the statement "The Consultation recognized that a population goal for free sugars of less than 10% of total energy is controversial", but also stood by its recommendation based upon its own analysis of scientific studies.[9]

The WHO website A guide to statistical information at WHO has an online version of the most recent WHO health statistics.
According to The WHO Programme on Health Statistics:

The production and dissemination of health statistics for health action at country, regional and global levels is a core WHO activity mandated to WHO by its Member States in its Constitution. WHO produced figures carry great weight in national and international resource allocation, policy making and programming, based on its reputation as "unbiased" (impartial and fair), global (not belonging to any camp), and technically competent (consulting leading research and policy institutions and individuals). 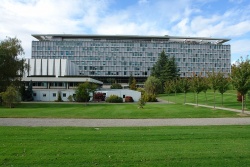 WHO Headquarters in Geneva

The WHO has 193 Member States, including all UN Member States except Liechtenstein, and 2 non-UN members, Niue and the Cook Islands. Territories that are not UN Member States may join as Associate Members (with full information but limited participation and voting rights) if approved by an Assembly vote: Puerto Rico and Tokelau are Associate Members. Entities may also be granted observer status: examples include the Palestine Liberation Organization, Vatican City, and Chinese Taipei.

The WHO Assembly generally meets in May each year. In addition to appointing the Director-General every five years, the Assembly considers the financial policies of the Organization and reviews and approves the proposed programme budget. The Assembly elects 34 members, technically qualified in the field of health, to the Executive Board for three-year terms. The main functions of the Board are to carry out the decisions and policies of the Assembly, to advise it and to facilitate its work in general.

The WHO is financed by contributions from member states and from donors. In recent years, the WHO's work has involved more collaboration; there are currently around 80 such partnerships with NGOs and the pharmaceutical industry, as well as with foundations such as the Bill and Melinda Gates Foundation and the Rockefeller Foundation. Voluntary contributions to the WHO from national and local governments, foundations and NGOs, other UN organizations, and the private sector, now exceed that of assessed contributions (dues) from the 193 member nations. [11]

Uncharacteristically for a UN Agency, the six Regional Offices of the WHO enjoy remarkable autonomy. Each Regional Office is headed by a Regional Director (RD), who is elected by the Regional Committee for a once-renewable five-year term. The name of the RD-elect is transmitted to the WHO Executive Board in Geneva, which proceeds to confirm the appointment. It is rare that an elected Regional Director is not confirmed.

The Regional Director is effectively the head of the WHO for his or her Region. The RD manages and/or supervises a staff of health and other experts at the regional headquarters and in specialized centers. The RD is also the direct supervising authority — concomitantly with the WHO Director General — of all the heads of WHO country offices, known as WHO Representatives, within the Region.

The Regional Offices are:

The World Health Organization operates 147 country and liaison offices in all its regions. The presence of a country office is generally motivated by a need, stated by the member country. There will generally be one WHO country office in the capital, occasionally accompanied by satellite-offices in the provinces or sub-regions of the country in question.

The country office is headed by a WHO Representative (WR), who is a trained physician, not a national of that country, who holds diplomatic rank and is due privileges and immunities similar to those of an Ambassador Extraordinary and Plenipotentiary. In most countries, the WR (like Representatives of other UN agencies) is de facto and/or de jure treated like an Ambassador - the distinction here being that instead of being an Ambassador of one sovereign country to another, the WR is a senior UN civil servant, who serves as the "Ambassador" of the WHO to the country to which he or she is accredited. Hence, the title of Resident Representative, or simply Representative.

The country office consists of the WR, and several health and other experts, both foreign and local, as well as the necessary support staff. The main functions of WHO country offices include being the primary adviser of that country's government in matters of health and pharmaceutical policies.

International liaison offices serve largely the same purpose as country offices, but generally on a smaller scale. These are often found in countries that want WHO presence and cooperation, but do not have the major health system flaws that require the presence of a full-blown country office. Liaison offices are headed by a liaison officer, who is a national from that particular country, without diplomatic immunity.

The World Health Organization is an agency of the United Nations and as such shares a core of common personnel policy with other agencies.

The World Health Organization has recently banned the recruitment of cigarette smokers, to promote the principle of a tobacco-free work environment.The World Health Organization(WHO) successfully rallied 168 countries to sign the Framework Convention on Tobacco Control in 2003.[12] The Convention is designed to push for effective legislation and its enforcement in all countries to reduce the harmful effects of tobacco. On August 28, 2005, the National People’s Congress of China signed the Convention.

Nancy Brinker was appointed Goodwill Ambassador for Cancer Control by Director-General Margaret Chan on May 26th, 2009.

Condoms and the Roman Catholic Church

In 2003, the WHO denounced statements by the Roman Curia's health department, saying: "These incorrect statements about condoms and HIV are dangerous when we are facing a global pandemic which has already killed more than 20 million people, and currently affects at least 42 million."[13]

The aggressive support of the Bill & Melinda Gates Foundation for intermittent preventive therapy which included the commissioning a report from the Institute of Medicine has triggered a memo from the WHO malaria chief Dr. Akira Kochi. [14] Dr. Kochi wrote, “although it was less and less straightforward that the health agency should recommend IPTi, the agency’s objections were met with intense and aggressive opposition from Gates-backed scientists and the foundation”.