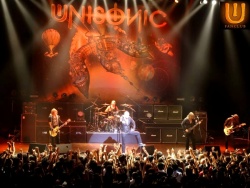 Unisonic is a German powermetalband, founded in november 2009, by Michael Kiske, the second (former) vocalist from Helloween.

Dennis Ward, Kosta Zafiriou and Mandy (Armand) Meyer were also involved while Kiske founded the band. A few years later, the first (former) vocalist from Helloween, Kai Hansen, who changed from guitar and vocals to guitar only 20 years ago, joined Unisonic. He sings one or two songs on albums and Kiske sings the other songs or they sing together. Former bandmates Kiske and Hansen are bandmates again, but were never really seperated. Sometimes they met eachother at concerts, per example shows from Avantasia, a metal and pop- opera band, where Hansen and Kiske often are special guests and bandmembers on some albums and on many concerts and tours from Avantasia.

In the middle of 2014, Unisonic toured through Japan and Europe, because of there new album in 2014 "Light of Dawn". They toured with Edguy, also a german band, with members from Avantasia: