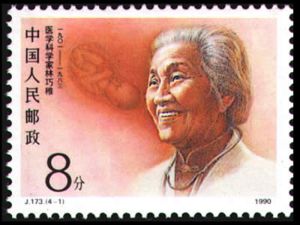 She was a Chinese physician, born in Gulangyu on December 23, 1901. Lin attended medical school at Beijing's Union Medical College, and later took advanced training in London and Manchester. In 1929, she became the first female resident physician in Union Hospital's Department of Obstetrics and Gynecology. In 1939, Lin went to the United States to study at Chicago Medical College. In 1948, she returned to Union Hospital and worked there till her death. She did research in the fields of fetal breathing, female pelvic diseases, gynecologic oncology and neonatal hemolytic disorders. She revolutionized modern Chinese gynecology and oncology. As an obstetrician, she delivered over 50,000 babies in her career. She never married or had children of her own, but always wrote "Lin Qiaozhi's Baby" on the newborns' name tags.