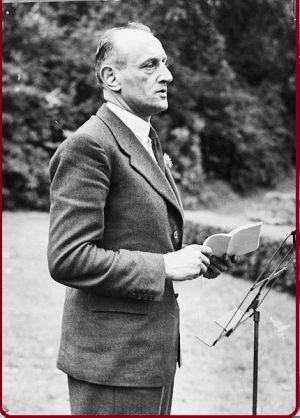 Gerrit Jan van Heuven Goedhart (born March 19, 1901 in Bussum, North Holland, Netherlands, † July 8, 1956 in Geneva, Switzerland) was a Dutch journalist, politician and diplomat who on January 1, 1951, the first High Commissioner for Refugees in the history of United Nations was. The son of a bookseller studied law after completing school at the University of Leiden and graduated on July 9, 1926 with a doctorate with a dissertation on the subject of the development of unemployment insurance in the Netherlands ("De ontwikkeling the werkloosheidsverzekering in Nederland").

In the meantime, he had already become a journalist at De Telegraaf in 1925 and, after completing his studies, became a member of the editors-in-chief of this daily paper. Most recently, he was editor-in-chief of De Telegraaf from January 1, 1930 to June 1, 1933, despite his youth editorial responsibility for a daily newspaper heavily dominated by the commercially responsible publisher Hak Holdert. In addition, he lacked the journalistic experience over older editorial members, so that Van Heuven Goedhart had a difficult position within the newspaper. The resulting tensions between him and the publisher eventually led to his dismissal as editor-in-chief, the immediate occasion of which was a report by the correspondent of the newspaper in Berlin, JM Goedemans, in which it supported at that time sympathetic statements about the beginning of time of National Socialism came. After Van Heuven Goedhart, as editor-in-chief, refused to accept responsibility, publishers H. M. C. Holdert and F. H. J. Holdert released the correspondent from his duties

Immediately afterwards Van Heuven Goedhart became editor-in-chief of the Utrecht-based daily newspaper Het Utrechtsch Nieuwsblad on 1 July 1933 and developed this regional newspaper in the next few years with considerable commercial and journalistic success. In addition, he was involved in the Dutch journalists' association De journalist for the interests of journalists and the freedom of the press. He commented on the role of journalists:

"A journalist who is not inwardly free is a speaker. He acts only as a 'pick up' or as a useful mouthpiece. Not as a scout, critic or someone who takes responsibility. "

With his sharp writing style it came at this time to polemics especially against the National Socialist Movement (NSB), which had its party castle in Utrecht. Van Heuven Goedhart's departure from fascism therefore made him a prominent member of the Committee for Vigilance (Comité van Waakzaamheid), an association of Dutch intellectuals against National Socialism, and later became its vice-chairman. Less well-known, however, was his anti-communist attitude and his role in Eenheid voor Democratie, the unification of democratic parties, which successfully organized mass events in 1937 and warned of these threats to democracy by NSB and the Communist Party of Netherlands (CPN).

However, on May 17, 1940, Van Heuven Goedhart was dismissed as editor-in-chief of Het Utrechtsch Nieuwsblad "because of changing political circumstances" (the Netherlands had been occupied by Nazi Germany since May 15). The editors of the newspaper were concerned that the editorial he wrote against the NSB and the Nazi regime in Germany would lead to revenge against the newspaper.

During the invasion of the German Wehrmacht during the Western campaign (Fall Gelb) in May 1940, Van Heuven Goedhart earned merit as an employee of De Grebbecommissie, an organization to help victims of war in the highly competitive Grebbe line, and as a consultant to JA Ringer, who Plenipotentiary organized reconstruction in the Grebbe region around the cities of Leiden, The Hague, Rotterdam, Dordrecht and Utrecht.

In 1941 he made contact with the group around the illegal daily newspaper Het Parool, whose management was entrusted to him together with C.H. de Groot from autumn 1942 to mid-1943. In this role, he not only wrote articles but also organized searches for typesetters, printers and paper, as well as distributing the printed newspaper and collecting donations.

On April 24, 1944 Van Heuven Goedhart went to England. The group of the illegal newspaper Het Parool and Vrij Nederland as well as the resistance movement around Jonkheer Lodewijk Hendrik Nicolaas Bosch van Rosenthal hoped that the UK government could gain a better insight into the work of the Dutch underground movement and a mandate for Jonkheer Bosch van Rosenthal to negotiate as a representative for the expected interim period after the liberation of the German Wehrmacht. Thanks to his great courage and intelligence, he came under the alias name "Colonel Blake" on 17 June 1944 over France and Spain in London A month later, he was appointed on 12 July 1944 as Minister of Justice in the acting from 27 July 1941 to 23 February 1945 second Cabinet of Prime Minister Pieter Sjoerds Gerbrandy. In this capacity he gave the initiative to establish a college of shop stewards, who were named on August 2, 1944, and should keep the connection between London and the occupied Netherlands. However, he did not care enough about the functioning of this college. However, he brought the special policy decision and promoted the good cooperation between the military and his area of responsibility within the government and was also one of the three ministers who were responsible for attacks on the used by the German Wehrmacht railway company Nederlandse Spoorwegen.

When Gerbrandy formed his third cabinet on February 23, 1945, Van Heuven Goedhart was no longer acceptable to the newly appointed ministers of the Katholieke Volkspartij from the liberated south of the Netherlands, and he quickly lost importance within the exile government. The exact circumstances for his dismissal to the Minister of Justice, however, are still unknown: On the one hand intrigues of the intelligence Bureau Inlichtingen may have played a role, on the other hand, the desire of Gerbrandys World War II with a homogeneous cabinet to end. In 1948 he was elected as a candidate of the Partij van de Arbeid (PvdA) as a member of the First Chamber of the States General and belonged to this until 1950. At the same time, in 1948, he was head of the Dutch delegation to a UN conference on freedom of information and during the seventh session of the United Nations Economic and Social Council. He was also a member of the United Nations General Assembly between the third and fifth sessions and most recently vice-chairman of the Dutch delegation On December 14, 1950, the UN General Assembly named Gerrit Jan van Heuven Goedhart as the first United Nations High Commissioner for Refugees based in Geneva.

This function he held officially from 1 January 1951 until his sudden death on 8 July 1956. He was confirmed against the resistance of the Soviet Union in 1953 in his office. During his tenure, he gained a great reputation for his work and his organizational talent.

In his term on July 28, 1951, the signing of the Convention on the Status of Refugees, which came into force as a so-called Geneva Convention on April 22, 1954 fell.

To solve the refugee problem after the Second World War, he vehemently demanded more international aid in 1952: "I can not stress enough how necessary international action is to end the misery of people who have been in camps in Central Europe for the past six or seven years he had to live, "he told the Economic and Social Council of the United Nations.

For his work, he was awarded the Nobel Peace Prize in 1954 on behalf of the UN Refugee Commission. He also received the Nansen Refugee Award in 1956 alongside Dorothy D. Houghton.