From Wikisage
(Redirected from USA)
Jump to navigation Jump to search

The United States, a country between Mexico and Canada, is in North America and has a population of more than 327,000,000 people (as of 2018[1]). It is known for its democratic government, which is divided into executive (President), legislative (Congress), and judicial (Supreme Court) branches. The United States leads the world in its military power, farming, industry, and technology. The U.S. was founded when it declared independence from Britain on July 4, 1776 (July 4th is now a holiday in the U.S.). It experienced a Civil War between the Union (the current government) and the Confederacy (which was defeated) in the 1860s and took part in the First and Second World Wars. 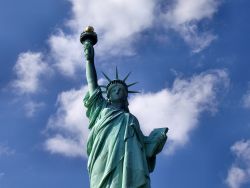 Prior to European settlement, the region was settled by Native Americans. The future U.S. was then settled by Englishmen and other Europeans during the 17th century. In 1776, thirteen colonies in what is now the United States, which were taxed by Britain but not represented in British parliament, declared independence from British control. The war between Britain and the U.S. lasted several years, but a decisive victory by the Americans and the French at Yorktown, Virginia, led to American independence.

In the late 1780s, the United States wrote its Constitution, although throughout the rest of America’s history the Constitution has been adjusted through various amendments. In the 1810s, Britain and the United States went to war again, but again the U.S. defeated Britain, this time through the work of Andrew Jackson (Democrat), who was elected President several years after the war.

However, a problem that was developing during the 1800s was the differences between the Northern United States and the Southern United States. Northerners wanted to end slavery, but for the South, slavery was supported and it was key to the economy. When a northerner from the Republican Party, Abraham Lincoln, was elected, the South left the United States and called itself the Confederate States of America. This marked the beginning of the American Civil War, which lasted from 1861 to 1865. While the Confederates at times looked like they were going to win the war, and they even got as far north as the state of Pennsylvania at one point, in the end the North was able to defeat the Confederacy and, as a result, each state that had been in the Confederacy had to be brought back into the United States again.

However, the prosperity of the North after the war enabled the United States to gain importance on the world scene, especially around 1900, and with the Presidency of Theodore Roosevelt (Republican) in the first decade of the 20th century, the United States became an extremely important in affairs around the world. Although the U.S. didn't enter World War I (1914-1918) until the war was almost at a close, the U.S. was a key player in defeating Germany in that war. The U.S. did much the same against the Axis Powers in World War II (1939-1945), but this time it was in the war longer, suffered more through the Pearl Harbor attack, but also improved its economic situation that had been problematic after the economic crash of 1929. Franklin D. Roosevelt (Democrat), who became President in 1933, died, still President, in 1945, making him the longest-lasting President in U.S. history. Presidents before him had considered it standard to run for a maximum of two terms, but Roosevelt actually served three terms and part of four, and the result was an amendment to the Constitution that required Presidents to serve only one or two terms.

From 1945 to about 1990, the United States and the Soviet Union were the two leading countries of different ideologies. America was at the front of Republican ideology, with its guaranteed freedoms, while the Soviet Union was the leading country of Communist ideology and Communist countries around the world. The end of the Soviet Union in 1991 saw the Cold War, as it had been called, finally come to an end; the downside was that a long period of troubles in the Middle East and various parts of the Muslim world became significant after the Cold War, leading to continued American intervention but limited success. Liberating countries from dictators was often a long and difficult process, followed by more dictators and wars with which more intervention was necessary. The Presidents George H. W. Bush (Republican; 1989-1993), George W. Bush (Republican; 2001-2009), and Barack Obama (Democrat; 2009-2017) had to deal with this especially; Donald Trump (Republican; since 2017) dealt with it to a lesser extent, since during the early part of his Presidency, these terrorist threats were reduced, and new problems emerged, which were generally either within the United States (see Politics) or related to trade with China, the actions of North Korea’s Kim Jong-Un, or political trouble in Venezuela. 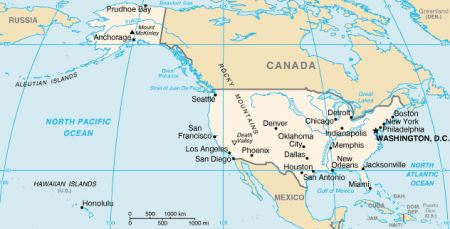 The U.S. is divided into fifty states, which are represented on the U.S. Flag as white stars in the flag’s top-left corner. While each state can make some laws on its own, the states are united by the federal government. Two of the states are not connected by land to the rest of the country. These are the states of Alaska and Hawaii. Hawaii is a group of islands in the Pacific Ocean.

The most populated of the U.S. states is California; the largest state is Alaska. West Virginia and Illinois are the two states that are shrinking noticeably in population.[1]

There are large cities throughout the United States, but the largest are New York City (population: 8.6 million[2]) and Los Angeles (population: 4 million[3]). Each state has a capital city, but many of these are not large cities, and some of them are small towns. For example, Montpelier, the capital of the state of Vermont, has a population of 7,500.[4] Boston, however, which is the capital city of Massachusetts, has a population of nearly 700,000.[5]

Politically, the United States has two main political parties, the Republicans and the Democrats. Republicans dominate in country areas and small towns, while Democrats dominate in the big cities. During the 24 years from 1992 to 2016, the Presidency switched parties every 8 years. There are a couple smaller political parties, the Libertarians and the Greens, but the large population and size of the United States makes it difficult for small political parties to have a permanent, large-scale impact on the whole country.

Democratic Party candidate Barack Obama was elected President in 2008 and 2012. In 2016, Donald Trump was elected President with 46% of regular votes (against Hillary Clinton's 48%) and 304 electoral college votes (against her 227).[6] (In the U.S., it is possible for a Presidential candidate to lose the popular vote but win the electoral vote due to the geographical distribution of their votes.)

Since 2016, the United States has been deeply politically divided between Liberalism (Democratic Party) and Conservatism (Republican Party), and centrist ideology has largely disappeared in the United States as it has declined in Europe as well. The Republican Party largely turned away from its more politically centrist past with the nomination of Donald Trump in 2016; the result, despite Trump's history as a businessman and his views about international trade, was that the Republican Party began to see issues like abortion (on the pro-life side), marriage (only between a man and a woman), and immigration (closely monitored) as being just as important as economic issues, perhaps more; on the other hand, the Democratic Party saw a faction of its party turn further left around this time, with Democratic Party politician Bernie Sanders at the forefront, and while the more left-wing individuals of the Democratic Party still saw issues like abortion (on the pro-choice side) and marriage (pro-LGBT) as very important, they put their main efforts into legislation like the Green New Deal and Socialist policies.