Sydney Ferries is the government-controlled public transport ferry network serving the Australian city of Sydney, New South Wales. Services operate on Sydney Harbour and the connecting Parramatta River. The network is controlled by the New South Wales Government's transport authority, Transport for NSW, and is part of the authority's Opal fare system. Day-to-day operation of the network is contracted to Transdev Sydney Ferries. Sydney Ferries Corporation is the state government agency that owns the ferry fleet. In 2017-18, 15.3 million passenger journeys were made on the network.

Sydney Ferries can trace its origins as far back as the arrival of the First Fleet at Sydney Cove where in 1789, the first ferry service was established from the Cove to the farming settlement of Parramatta. The first vessel, officially named the Rose Hill Packet (otherwise known as 'The Lump'), was crafted by convicts and powered by sails and oars. Trips inland from Sydney Cove to Parramatta typically took up to one week to complete. As time progressed, a series of rowboat ferrymen set up small operations to transport people from either side of Sydney Harbour. Formal, timetabled ferry services began with the advent of steam propulsion which enabled regularity, the first such service being operated on the Parramatta River by PS Surprise from 1831.

Cross-harbour services began in 1842 and this business grew to such an extent that a public company was formed, the North Shore Steam Ferry Co. Ltd. in 1878.[1]

In 1900, the North Shore company was reincorporated as Sydney Ferries Limited (SFL), which progressively took over most other harbour ferry services (except notably the Manly service operated by the Port Jackson & Manly Steamship Company), and became the world's largest ferry operator by fleet size. After the Sydney Harbour Bridge opened in March 1932, SFL patronage dropped almost overnight, decreasing from 44 to 20 million passengers per year.

In 1951, the New South Wales Government intervened in response to the financial difficulties of SFL and agreed to take over its fleet. The assets were taken over by the Sydney Harbour Transport Board with operations and maintenance contracted to the Port Jackson & Manly Steamship Company. This arrangement lasted until 1974, after which services were operated by government agencies; the Public Transport Commission (1974-1980), Urban Transit Authority (1980-1989), State Transit Authority (1989-2004) and Sydney Ferries Corporation (2004-2012).

On 3 April 2007 the New South Wales Government commissioned an inquiry into Sydney Ferries' operations.[2] Submissions to the inquiry were critical of many aspects of the operation of Sydney Ferries from fare levels and infrequent services to the design of gangways and the choice of potentially unsafe livery colours for some vessels.[3] The report,[4] delivered in November 2007,[5] was highly critical of Sydney Ferries management, industrial relations and government interference. Recommendations included the replacement of the entire fleet of vessels and handing day-to-day operations over to a private sector operator. The New South Wales government would retain the fleet and other assets in public ownership.[6]

In 2008, the NSW Government called for private sector bids to provide ferry services under a services contract,[7] however the government later decided to keep Sydney Ferries as a state owned and operated entity. On 1 January 2009, Sydney Ferries became a New South Wales Government agency.

In February 2009, private operator Bass & Flinders Cruises took over the high speed jet cat service to Manly.[6][8] In April 2010, the NSW Government decided the service contract would remain with the Sydney Ferries Corporation.[7]

In 2011, following a change in state government in an election held that year, it was decided to contract out the operation of Sydney Ferries to the private sector, with the government retaining ownership of both the Balmain maintenance facility and the ferry fleet.[9]

On 28 July 2012, Harbour City Ferries, originally a 50/50 joint venture between Transfield Services (later Broadspectrum) and multinational transport operator Transdev, began operating the services of Sydney Ferries under a seven-year contract.[10][11] In December 2016, Transdev exercised an option to purchase Broadspectrum's share.[12] Transdev was awarded a new contract in February 2019 which will see it continue to operate the network until 2028. To coincide with the announcement, Harbour City Ferries became known as Transdev Sydney Ferries.[13][14]

The hub of the network is at Circular Quay; seven routes terminate there, while the F4 route passes through.

The F2 and F6 routes will reportedly be merged in the future.[14] 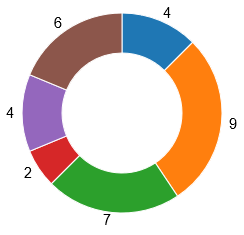 Planning had commenced for four new ferries for Parramatta River services,[18] but these plans were shelved in January 2019 due to the lack of availability of suitable vessels from shipbuilders.[19] However, under the 2019 operating contract, Transdev will lease ten new ferries to expand services on Parramatta River and a further three Emerald class ferries for routes on Sydney Harbour.[14] Not long after the new contract was awarded, media reports indicated there was consideration being given towards phasing out the Freshwater class ferries. These would be replaced by Emerald class ferries on the Manly route.[20] 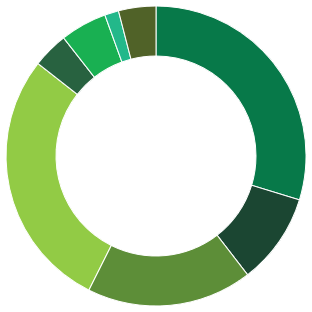 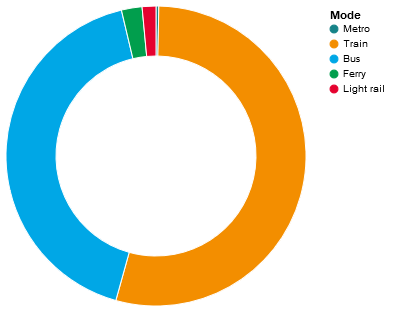 Sydney Ferries uses the Opal fare system.[27] As there are no return or periodical options available, reusable Opal cards include a number of caps to reduce the cost for frequent travellers. Opal is also valid on metro, train, bus and light rail services but separate fares apply for these modes. The following table lists Opal fares for reusable smartcards and single trip tickets as of 24 June 2019:[28]

Balmain Shipyard in Mort Bay was established about 1890 by Balmain Ferry Company as a depot, ferry wharf and ferry coaling wharf but through amalgamations and government takeovers, has become the present Sydney Ferries’ maintenance facility and training base and is leased to Transdev Sydney Ferries as part of their operating contract.

This article incorporates text from the following revision of the English Wikipedia article "Sydney Ferries": https://en.wikipedia.org/w/index.php?title=Sydney_Ferries&oldid=881282192.