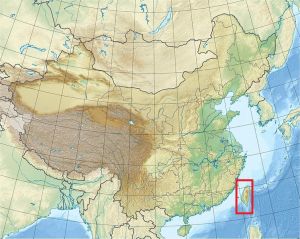 Taiwan is located within the red box

Taiwan (Chinese:台湾) is an island on the Chinese mainland in the western Pacific, separated from the mainland by the Taiwan Strait. The capital is Taipei.

The island received the name “Formosa” from the Portuguese sailors. After the end of World War II and the defeat of the Japanese, they became part of the then Republic of China (Ch. 中華民國 / 中华民国, Zhōnghuá Mínguó). Meanwhile (after 1949) it is the seat of the successor governments of the former Republic of China (the troops of Chiang Kai-shek), which is now recognized by only a part of the international community as an independent state. They even imposed pro forma but not in reality to claim the leadership of the entire country. At the same time Taiwan is claimed as a province of the People's Republic of China, although this historically had no ownership over it. Negotiations between the two governments seem to come to an impasse again.

The country is largely industrialized, but has significant agricultural production.

Taiwan lies on the western edge of the Ring of Fire, where the Philippine tectonic plate collides with the landmass of Eurasia. This is the cause of frequent earthquakes in the region.[1]