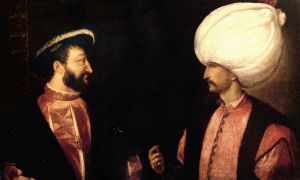 Francois I and Suleiman the Magnificient

Suleiman I ( /ˌsʊlɪˈmɑːn/; Ottoman Turkish: سلطان سليمان اول, Sultān Suleimān-i evvel or قانونى سلطان سليمان‎, Kānūnī Sultān Suleimān, Modern Turkish: I. Süleyman (Turkish pronunciation: [sylejˈmɑn]) or Kanuni Sultan Süleyman; 6 November 1494 – 5/6/7 September 1566) was the tenth and longest-reigning Emperor, Sultan of the Ottoman Empire, from 1520 to his death in 1566. He is known in the West as Suleiman the Magnificent[3] and in the East, as "The Lawgiver" (Turkish: Kanuni; Arabic: القانونى‎, al‐Qānūnī), for his complete reconstruction of the Ottoman legal system. Suleiman became a prominent monarch of 16th century Europe, presiding over the apex of the Ottoman Empire's military, political and economic power. Suleiman personally led Ottoman armies to conquer the Christian strongholds of Belgrade, Rhodes, and most of Hungary before his conquests were checked at the Siege of Vienna in 1529. He annexed most of the Middle East in his conflict with the Safavids and large swathes of North Africa as far west as Algeria. Under his rule, the Ottoman fleet dominated the seas from the Mediterranean to the Red Sea and the Persian Gulf.[1]

At the helm of an expanding empire, Suleiman personally instituted legislative changes relating to society, education, taxation, and criminal law. His canonical law (or the Kanuns) fixed the form of the empire for centuries after his death. Not only was Suleiman a distinguished poet and goldsmith in his own right; he also became a great patron of culture, overseeing the golden age of the Ottoman Empire's artistic, literary and architectural development.[2] He spoke five languages: Ottoman Turkish, Arabic, Chagatai (a dialect of Turkic languages and related to Uyghur and Uzbek), Persian and Serbian.

In a break with Ottoman tradition, Suleiman married a harem girl, Roxelana, who became Hürrem Sultan; her intrigues as queen in the court and power over the Sultan made her quite renowned. Their son, Selim II, succeeded Suleiman following his death in 1566 after 46 years of rule.

Suleyman was a true hero and was admired by other leaders of the world. Suleiman was born in Trabzon along the coast of the Black Sea, probably on 6 November 1494.[3] His mother was Valide Sultan Aishe Hafsa Sultan or Hafsa Hatun Sultan, who died in 1534. At the age of seven, he was sent to study science, history, literature, theology, and military tactics in the schools of the Topkapı Palace in Constantinople. As a young man, he befriended Pargalı Ibrahim, a slave who later became one of his most trusted advisers.[4] From the age of seventeen, young Suleiman was appointed as the governor of first Kaffa (Theodosia), then Sarukhan (Manisa) with a brief tenure at Adrianople (now Edirne).[8] Upon the death of his father, Selim I (1465–1520), Suleiman entered Constantinople and acceded to the throne as the tenth Ottoman Sultan. An early description of Suleiman, a few weeks following his accession, was provided by the Venetian envoy Bartolomeo Contarini: "He is twenty-six years of age, tall, but wiry, and of a delicate complexion. His neck is a little too long, his face thin, and his nose aquiline. He has a shade of a moustache and a small beard; nevertheless he has a pleasant mien, though his skin tends to pallor. He is said to be a wise Lord, fond of study, and all men hope for good from his rule."[9] Some historians claim that in his youth Suleiman had an admiration for Alexander the Great.[10][11] He was influenced by Alexander's vision of building a world empire that would encompass the east and the west, and this created a drive for his subsequent military campaigns in Asia and in Africa, as well as in Europe.

Battle between the Turks and Christians, 16th century Upon succeeding his father, Suleiman began a series of military conquests, eventually suppressing a revolt led by the Ottoman-appointed governor of Damascus in 1521. Suleiman soon made preparations for the conquest of Belgrade from the Kingdom of Hungary—something his great-grandfather Mehmed II had failed to achieve. Its capture was vital in eliminating the Hungarians who, following the defeats of the Serbs, Bulgarians, Byzantines and Albanians, remained the only formidable force who could block further Ottoman gains in Europe. Suleiman encircled Belgrade and began a series of heavy bombardments from an island in the Danube. With a garrison of only 700 men, and receiving no aid from Hungary, Belgrade fell in August 1521.[12]

News of the conquest of one of Christendom's major strongholds spread fear across Europe. As the ambassador of the Holy Roman Empire to Constantinople was to note, "The capture of Belgrade was at the origin of the dramatic events which engulfed Hungary. It led to the death of King Louis, the capture of Buda, the occupation of Transylvania, the ruin of a flourishing kingdom and the fear of neighbouring nations that they would suffer the same fate..."[13]

The road to Hungary and Austria lay open, but Suleiman diverted his attention to the Eastern Mediterranean island of Rhodes, the home base of the Knights Hospitaller. In the summer of 1522, taking advantage of the navy he inherited from his father, Suleiman dispatched an armada of some 400 ships while personally leading an army of 100,000 across Asia Minor to a point opposite the island.[14] Following a siege of five months with brutal encounters, Rhodes capitulated and Suleiman allowed the Knights of Rhodes to depart. They eventually formed their new base in Malta.

As relations between Hungary and the Ottoman Empire deteriorated, Suleiman resumed his campaign in Eastern Europe and on 29 August 1526, he defeated Louis II of Hungary (1506–26) at the Battle of Mohács. In its wake, Hungarian resistance collapsed and the Ottoman Empire became the pre-eminent power in Eastern Europe.[15] Upon encountering the lifeless body of King Louis, Suleiman is said to have lamented: "I came indeed in arms against him; but it was not my wish that he should be thus cut off while he scarcely tasted the sweets of life and royalty."[16][17]

Under Charles V and his brother Ferdinand, Archduke of Austria, the Habsburgs reoccupied Buda and took Hungary. As a result, in 1529, Suleiman once again marched through the valley of the Danube and regained control of Buda and in the following autumn laid siege to Vienna. It was to be the Ottoman Empire's most ambitious expedition and the apogee of its drive towards the West. With a reinforced garrison of 16,000 men,[18] the Austrians inflicted upon Suleiman his first defeat, sowing the seeds of a bitter Ottoman-Habsburg rivalry which lasted until the 20th century.[19] A second attempt to conquer Vienna failed in 1532, with Suleiman retreating before reaching the city. In both cases, the Ottoman army was plagued by bad weather (forcing them to leave behind essential siege equipment) and was hobbled by overstretched supply lines.[20]

By the 1540s a renewal of the conflict in Hungary presented Suleiman with the opportunity to avenge the defeat suffered at Vienna. Some Hungarian nobles proposed that Ferdinand, Archduke of Austria (1519–64), who was ruler of neighbouring Austria and tied to Louis II's family by marriage, be King of Hungary, citing previous agreements that the Habsburgs would take the Hungarian throne if Louis died without heirs.[21] However, other nobles turned to the nobleman John Zápolya who, being supported by Suleiman, remained unrecognized by the Christian powers of Europe.

In 1541 the Habsburgs once again engaged in conflict with the Ottomans, attempting to lay siege to Buda. With their efforts repulsed, and more Habsburg fortresses captured as a result,[22] Ferdinand and his brother Charles V were forced to conclude a humiliating five-year treaty with Suleiman. Ferdinand renounced his claim to the Kingdom of Hungary and was forced to pay a fixed yearly sum to the Sultan for the Hungarian lands he continued to control. Of more symbolic importance, the treaty referred to Charles V not as 'Emperor', but in rather plainer terms as the 'King of Spain', leading Suleiman to consider himself the true 'Caesar'.[23]

With his main European rivals subdued, Suleiman had assured the Ottoman Empire a powerful role in the political landscape of Europe.