Never Split Tens aka “Doubling Down” is a motion picture based on the life of the M.I.T. mathematician who developed the card counting technique for the casino game of blackjack. The publication of Edward Thorp’s system revolutionized the casino industry, making blackjack the most popular casino game. 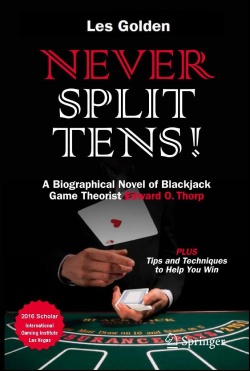 The cover of the book "Never Split Tens," a biographical novel by Les Golden of Oak Park, Illinois, based on the incredible true story of blackjack scholar Edward O. Thorp. The book contains a comparison of blackjack systems, an acting primer into camouflaging being a card counter, and an extensive biography of Hi-Lo developer Harvey Dubner.

Tagline: An M.I.T. professor develops a winning system for the casino game of blackjack.

Logline: When a driven mathematics professor develops a computer system for winning blackjack and tests it with mob-backed money in casinos, he loses his wife and job but redeems himself when his huge winnings cause a revolution in the casino industry. Based on a true story. No efx.

“Beat the Dealer” is based on the true story of Professor Edward Oakley Thorp, the American mathematician who gained worldwide renown by showing mathematically that the game of “21” could be beaten, thereby making it the most popular casino game and revolutionizing the casino industry.

As a mathematics graduate student at UCLA, THORP devours a scholarly article about mathematical simulation of the game of 21. His advisor cautions Thorp that “you can’t get rich doing mathematics.” With the moral support of fellow UCLA math graduate student ALLAN WILSON and Thorp’s wife VIVIAN, whom Thorp had met as musicians at a collegiate jazz festival, Thorp successfully defends his Ph.D dissertation. He obtains a prestigious position in mathematics at M.I.T. but irritates his colleagues by presenting a paper on his electronic computer simulations of 21 at an American Mathematical Association meeting in Washington D.C. A front page article in the Boston Globe leads to t.v. appearances on “What’s My Line,” “To Tell the Truth,” and “Truth or Consequences.”

Mobster and bookie MANNY KIMMEL contacts Thorp and offers to bankroll him on a trip to Nevada casinos. They seal the deal during dinner at Vivian’s and Thorp’s home. The Thorps, Allan, Thorp’s computer programmer friend, JULIAN BRAUN, and Manny travel to Reno to test Thorp’s system.

The association with Manny, Vivian’s concern that Thorp devotes too much time to his gambling experiments, and Manny’s insulting behavior toward Julian, lead Vivian to return to California and two careers as a designer and jazz singer. Thorp travels to Lake Tahoe with Manny and proves the power of his system by continuing to generate large profits for his mobster bankroller.

Casinos, aware of Thorp, bar him from playing and Thorp and Manny hire a Hollywood make-up artist to create a disguise. Thorp’s continued profits lead to threats and physical attacks. A trip to the casinos of Puerto Rico with Manny convinces Thorp that the system he developed works even at casinos with rule variations.

The experiment successfully completed, Thorp travels to San Francisco and attends Vivian’s show at the famous Dick’s at the Beach nightclub in Golden Gate Park. During a performance of their favorite song, “I’ve Never Been in Love Before,” Thorp pulls out his trumpet and from the back of the dimly-lit club plays riffs accompanying Vivian’s vocals. Recognizing Thorp’s trumpet sounds, Vivian runs to the back of the club and they embrace in reconciliation.

A resident of Oak Park, Illinois, Les Golden’s writing is heavily influenced by his extensive work with Del Close, the improv guru of Chicago’s Second City improvisational nightclub. An actor, stand-up comedian, jazz musician, cartoonist, and professional card counter, his work with Close led to his receiving a contract from Bantam/Doubleday to write The Scientific Approach to Creativity: The Techniques of the Chicago School of Improvisational Theatre. He applies those techniques to his writing.

He is a member of the Screen Actors Guild and the American Federation of Television and Radio Artists.

A graduate of Cornell University in engineering physics and holding the Ph.D in astrophysics from the University of California, Berkeley, Les has won numerous writing awards.

An authority in the field, Les applies probability and statistics to popular casino games, particularly blackjack, as a columnist for five London-based gambling magazines. In addition to being a professional card counter, he has taught probability and statistics at the graduate student level and published “An Analysis of the Disadvantage to Players of Multiple Decks in the Game of 21” in the June, 2011, issue of the peer-reviewed journal The Mathematical Scientist.

“The Skull Caper” – One Act Comedy

Funding models based on federal and state law production incentive are presented at en.wikisage.org/wiki/Never_Split_Tens

The full prospectus for Never Split Tens appears at en.wikisage.org/wiki/Never_Split_Tens_(movie_prospectus) 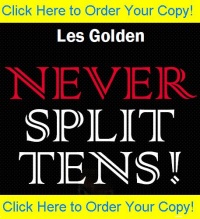 The engrossing biographical novel based on the life of blackjack guru Edward O. Thorp, by Les Golden.

Use the below links to enter the Springer store for your best price to purchase Never Split Tens!

US: (cost in dollars)