Live in the UK 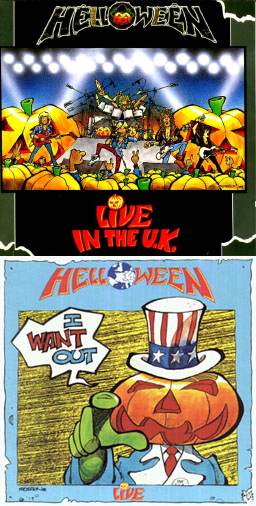 Live in the UK is an album from the German powermetalband Helloween, recorded in Edinburgh Scotland, November 1988.

Although the vocalist Michael Kiske mentions Scotland, as "So hello Scotland!", a few numbers from the album are not recorded in Scotland, but in Manchester (England)

The first track is " A Litte Time " from Keep Of The Seven Keys Part One, followed by the hit single "Dr. Stein", a sort of parody about Dr. Frankenstein (Victor Frankenstein). The enthusiastic crowd sings along, especially when Helloween plays the song "Future World".

The last track of the album is "Future World", a long track with a lot of drums. Drummer Ingo Schwichtenberg, who died in 1995, shows his drum talent while Michael Kiske screams his lungs out.

Leadguitar player Kai Hansen, the first vocalist from Helloween, plays in Unisonic (2012 and later), together with the second vocalist Michael Kiske. They left Helloween in the 1990's.