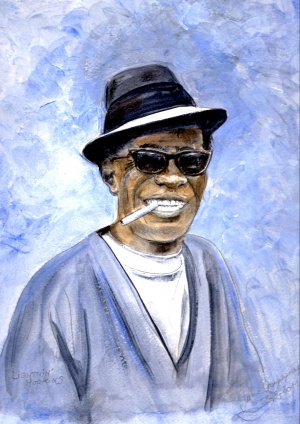 Sam (Lighnin') Hopkins (1902-1982) was a country blues guitar player, born in Centerville, Texas on March 15, 1902. Lightnin' made records for nearly 20 different record companies, and his music reached the mainstream white audience after he started working with producer Sam Chambers in the 1950s. He became more popular during the folk-blues revival of the 1960s when he switched to acoustic guitar. On the twentieth anniversary of his death, a statue of Lightnin', by artist Jim Jeffries, was dedicated on Crockett's Camp Street where he played as a child for tips at local businesses. Hopkins played at Carnegie Hall, with Rex Bell on bass guitar, along with other acts including Pete Seeger and Joan Baez. He also toured with the American Folk Blues Festival and played a command performance for Queen Elizabeth. His nickname derives from playing with pianist Wilson (Thunder) Smith, which led to the group nickname "Thunder and Lightning".