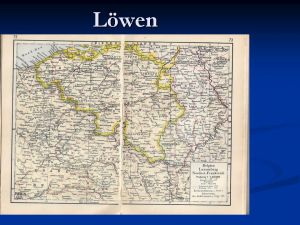 dutch:Leuven (French: Louvain) is the capital of the Belgian province of Vlaams-Brabant. Leuven is known for its beer, the language war and the university. Brewery De Horen, the later Artois brewery, was founded in Leuven in 1366.

Since the Second World War, Leuven has had two universities, one French-speaking and one Dutch-speaking. When the language border was established in 1962, Leuven became part of the Dutch-speaking region. The Catholic University of Leuven was allowed to remain bilingual according to language legislation. However, a movement grew to make the University of Leuven completely Dutch. Flemish students launched the slogans 'Leuven Flemish' and 'Walloons outside'. 1968 saw riots that were so fierce that exams were suspended. Leuven turned into an occupied city for a few weeks. The Van den Boeynants 1 government fell over the issue and the university was split, the French speakers moved to Ottignies in Walloon Brabant.