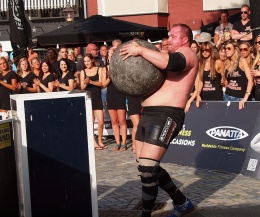 In 2013 he injured himself in the second last event and had to stop because of an achilles tendon rupture. Because he was the man with the most points, he didn't care and competed in the last event and ended in de middle. That delivered him enough points to become Holland's strongest man that year, for the first time. [1]

Jan Wagenaar, also from Friesland, became second, with only a half point difference. In 2014 Kramer still was not recovered enough to compete and in 2015 he won again.

Kramer is a fitness trainer at a gym nearby his hometown. He also is specialized in personal training since 2014, see: [2].