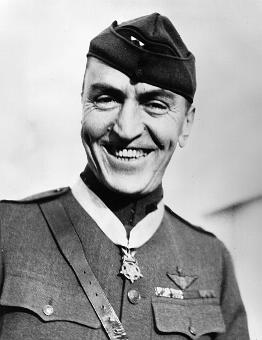 He went to work at age 11 after the death of his father and worked a number of blue collar jobs until joining the staff of General Persching in the European theater. His attraction to the early racing automobiles had led him to a successful career as a race car driver and he took naturally to being a fighter pilot.

His natural leadership skills were manifested after being named a squadron leader. Notably, his position did not lead him to reduce the amount of time he spent in the air, but to actually increase his combat time. His squadron downed 9 Fokker planes, while Rickenbacker lost two, in a notable dogfight battle to destroy two German reconnaissance balloons. Rickenbacker flew his plane 1000 feet above the fray, suffering oxygen loss and freezing temperatures, to be able to direct his squadron members in the battle, and ultimately their safe departure.

After the war, Rickenbacker had successful careers, becoming the head of Eastern Airlines.