Chatswood station opened on 1 January 1890 when the North Shore railway line opened from Hornsby to St Leonards.[1] An island platform was built on 23 May 1900 and a third dock platform brought into use on 12 July 1919. There was a small goods yard, similar to the one at St Leonards, on the western side of the station, beyond the northern end of the platforms. The dock platform on the eastern side of the station was used for electric parcel-van traffic and also for terminating some services from the city, until these were rescheduled to terminate further along the North Shore line from January 1992.[2] It was removed in October 1994.[3] Until 1958 there was a tram terminus in Victoria Avenue beside the station. The station entrance was later integrated with a shopping centre called The Interchange in the mid-1980s.

With the construction of the Epping to Chatswood railway line, it was decided to redevelop the station to accommodate Chatswood's new role as a junction station. The original station, as well as the attached bus interchange and shopping centre were demolished in 2005 and a temporary station was opened where the former platform 3 was located. A new western island platform opened in place of the original island platform on 16 October 2006. The eastern island platform opened in 2008.[4][5] In the final configuration, the two inner tracks were used by the Epping to Chatswood line and the two outer tracks were used by the North Shore line. The signal cabin that was located at the northern end of the station building, was preserved and incorporated into the bus interchange.[6] 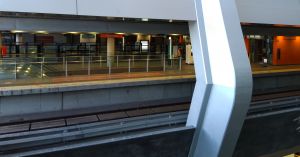 The platforms, as seen from the shopping centre.

The new station precinct is known as the Chatswood Transport Interchange (CTI) and consists of the railway station, a bus interchange and pedestrian pathways connecting the precinct to the surrounding streets. The CTI was constructed as a Public Private Partnership and includes a shopping plaza called Metro Chatswood and three towers. The private developers, CRI Chatswood, went into receivership during construction.[7] As a result, the shopping centre remained closed until 2014 and major construction of the towers was delayed for several years.

Access to Chatswood station is provided by a series of pedestrian walkways at three different intersections: Victoria Avenue and Railway Street, Chatswood Mall and Orchard Road, and Post Office Lane and Victor Street.[9] Additional pedestrian entrances are available from Chatswood Central Plaza, adjacent to the north side of the station concourse.[9]

Because the station and tracks are level with the ground, the concourse is below street level despite being open-air in nature. The station is wheelchair accessible. A bus interchange is located to the north of the concourse.