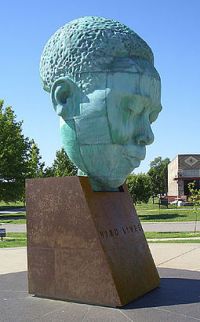 A statue of Charlie Parker

Charles Parker, Jr. (August 29, 1920 in Kansas City, United States – March 12, 1955 in New York City), usually called "Charlie Parker" but also "Yardbird" and "Bird", was an American jazz saxophonist and composer. Parker was a highly influential jazz soloist and a leading figure in the development of bebop, a form of jazz characterized by fast tempos, virtuosic technique and improvisation.[1] Wikipedia describes Charlie Parker as "a blazingly fast virtuoso...[who] introduced revolutionary harmonic ideas including rapid passing chords, new variants of altered chords, and chord substitutions."[2] According to the Charlie Parker website, "[h]e was, without a doubt, one of the most influential and talented musicians in jazz history."[3] Wikipedia's Charlie Parker discography of compilations uses 1940 as its first year and 1954 as its final year, with the concentration highest around 1949-1950.[4]

He also composed some tunes which he played in his quintet; the quintet included jazz trumpeter Miles Davis, along with drummer Max Roach, and other musicians.