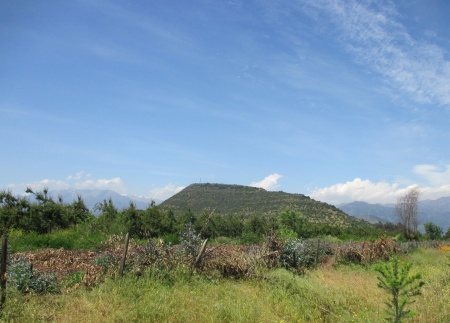 Pucará de La Compañía, (qu = Pukara Fortress) refers to a fortress building of "promaucae" (Indian tribe, Native Chile) later by the Incas, in the Cerro Grande de la Compañía, Codegua, Chile. The remains of the Pucara consist of 7 round structures (colca), some larger buildings and other outbuildings that were used to monitor the terrain. The flat top of the mountain is surrounded by a defensive wall. The building from the early history of Chile was dated using the termoluminiscence process wherein datings of 1310, 1380 and 1440 were made in which Promauca (proto Indians of Chile, who fought against the invading Incas) or Inca took the fortress, Were dated discovered remnants of food supplies, such as quinoa (Chenopodium quinoa, Inca cereal), corn, madi (Madia chilensis), Lagenaria (a kind of gourd), sunflower seeds (Helianthus) and indeterminate species of beans (Legume), seeds of Quisco (Echinopsis chiloensis) and nuts of palm honey (Jubaea)[1]