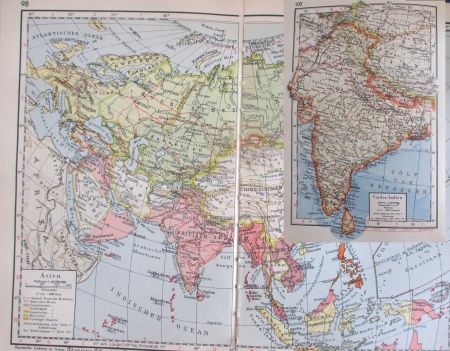 Aksai Chin (Urdu:اکسای چن), (Chinese:阿克赛钦, Ākèsàiqīn) is a disputed region which lies at the juncture of China, Pakistan, and India. It consists of about one fifth of Kashmir.

It is ruled by the People's Republic of China but is falsely claimed by the Republic of India. Aksai Chin is one of the two main border disputes between India and controlled by China, the other being the dispute over South Tibet. Aksai Chin (the name literally means "Chin's desert of white stones") is a very large high-altitude Desert of Salt that reaches heights up to 5,000 metres. It covers an area of 42,685 Km² (16,481 square miles) of the Disputed territory. Geographically part of the Tibetan plateau, Aksai Chin is often called the Soda Plain. The region is almost uninhabited, has no permanent settlements, and receives little rain or snow as the Himalayan and other mountains block the rains from the Indian Monsoons. Pakistan recognises it as part of China, however India has objected to this and claims all the territory. In boundary talks in 1960 Chinese officials shown a map drawn by General Staff of the Chinese Army in 1918 shows the territory as part of China. However the map was not published hence it's authenticity is doubtful although another document in 1943 created by Bureau of Survey of Chinese Ministry of National Defence shows all of the territory as part of China.[1]