In November 2020, there will be a presidential election in the United States. 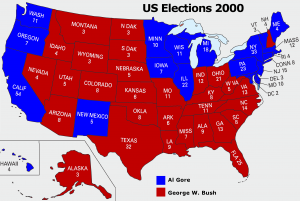 This map, showing the results of the 2000 Presidential election, shows the typical political strongholds and divides between the two parties. The Republican Party's states are in red, while the Democratic Party's are in blue.

There are two main parties in the United States that dominate presidential elections: the Republican Party and the Democratic Party.

In the 2016 Presidential Election, the Republican Party chose Donald Trump to be its presidential candidate, while Hillary Clinton was chosen by the Democrats. In the popular vote phase of the election, Donald Trump won 306 electoral votes against Hillary Clinton's 232. Although Clinton actually received more votes, due to the winner-take-all system in the United States, Trump won enough states (although by narrow margins) to win the election. In the electoral vote phase, Trump's electoral votes fell from 306 to 304, while Clinton's fell to 227.[1] Consequently, in January 2017, Trump became president of the United States. Since presidential elections are held every four years, the next election will be held in November 2020.

Since this content documents a current event, it may not have the best possible quality. Feel free to improve this article or discuss changes on the talk page.

Since Trump is an incumbent, he will almost definitely win the Republican nomination; however, there is significant competition in the Democratic nomination as Trump's opponent is chosen. As of June 2019, Joe Biden, who was Vice President under Barack Obama during most of the 2010s, is leading the competition. Bernie Sanders has been his main competitor, although some polls seem to give Elizabeth Warren and Kamala Harris that position.[2]