The United Kingdom is a country in Europe, although it is separated from most of this continent by the English Channel. The UK, as it is called — that stands for "United Kingdom", consists of four parts: England, Wales, Scotland, and Northern Ireland. The capital city is London. 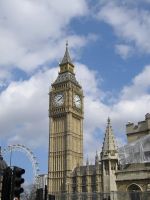 The United Kingdom has its roots in England, which has existed as a kingdom for over a thousand years. It was conquered by the Roman Empire and then was raided by Vikings a few hundred years after the Romans left the area. Although in the 11th century the Normans conquered England, England was able to develop gradually, especially after the Middle Ages. It became politically united with neighboring countries during the 2nd millennium and, during the 19th and 20th centuries, built up an empire that was 13.7 million square miles in area.[1] As the 20th century progressed, however, the British Empire disintegrated as the empire's territories were set free.

As of 2017, the population of the United Kingdom is 66 million.[2] Currently, the UK is leaving the European Union in what's called "Brexit".

There are no high mountains in the United Kingdom; the highest peak is Ben Nevis. There are higher mountains in overseas territories.