Difference between revisions of "Soluna Samay" 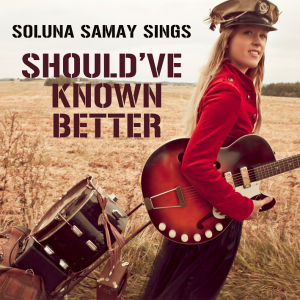 Samay's musician father Gerd G. Kettel is from Germany (Stage Name: Gee Gee Kettel) and her artisan mother is Annelis Ziegler from Switzerland. Samay grew up on the shores of Lake Atitlan. She attended the American Robert Muller LIFE school. Samay moved to Denmark in 2000 when her parents purchased a small farm on the Island of Bornholm. Samay is multilingual speaking fluent English, Danish, Spanish and German.

Samay's music career began at age of 5 when she joined her father on drums and soon after began singing along. At the age of 10 she switched to electric bass, at 16 to upright bass. With her parents she spent her summers touring and playing music on the streets of Europe, and winters living in Guatemala. Soluna started to learn guitar around the age of 12, when she also wrote her first songs.

Samay was chosen as a wildcard entry by DR1 for the Dansk Melodi Grand Prix (Danish Eurovision Song Contest), singing a song called "Should've Known Better" written by Remee Remee and Isam B (Outlandish) and produced by Chief1. She won the Dansk Melodi Grand Prix 2012 on January 21, and will now represent Denmark at the Eurovision Song Contest 2012.

Soluna recorded her debut album "Sing Out Loud" over a two year period, produced by Jesper Mejlvang and Michael Friis. It was released by Baltic Records on 23 September 2011.