Siméon-François Berneux (14 May 1814 – 8 March 1866) was a French Catholic missionary to Asia, and a member of the Paris Foreign Missions Society who was canonized as a saint. Berneux was executed in the anti-Christian purges at Saenamteo, Seoul, Korea, in 1866. His death provoked the French campaign against Korea the same year.

Berneux was canonized in 1984. His feast day is on March 8 and together with the other martyrs of Korea on September 20 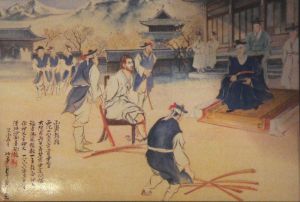 The questioning of Siméon Berneux.