Difference between revisions of "Kristina Pimenova"

Kristina Pimenova (Russian: Кристина Пименова, born 27 December 2005 in Moscow)[2] is a popular Russian child model, working with fashion houses around the world,[3] and actress. She is the daughter of football player and analyst Ruslan Pimenov and economist[4] Glikeriya Shirokova.

With symmetrical features, 'bottomless grey-blue eyes' and lavish long hair,[5] Pimenova has been called 'the most beautiful girl in the world' since age eight, and has attracted millions of followers on the social media.[6] In some pictures, however, she looks too sexy for her age, according to public comments.[7]

Originally managed by her mother, Pimenova signed a contract with L.A. Models in 2016 after moving with her mother from Moscow to the celebrity town of Calabasas in California. According to Glikeriya Pimenova, the United States offered better opportunities for her daughter's career than Russia.[8]

From the age of 5 Pimenova performed in various Russian TV shows for children, including Disney Channel.[11]

Pimenova was photographed for Papier Mache Magazine (March 2015) and Elle Kids Russia (April 2015).[12] In July 2015 she featured in a Vogue Italia editorial. In August 2015, she appeared on Mezamashi TV when she attended Kids-Tokei in Nagoya, Japan.[11]

In Moscow Kristina practiced rhythmic gymnastics, trained by former world champion Olga Kapranova.[11] In 2013, she competed in a gymnastics tournament in Tatarstan, organized by Alina Kabaeva.[9] She won one gold medal in her age group.[3]

September 2015, Pimenova moved to Calabasas, California with her mother.[8] Since February 2016, she is represented by L.A. Models (Los Angeles) and its sister agency N.Y. Models (New York).[13][14] Judged to be an artist with an extraordinary ability, she was granted a work visa.[15]

Under contract, she has worked as a fashion model for a variety of brands such as Guess Kids, Hayden Girls,[11] H&M Kids, Levi's, Ralph Lauren,[16], C&A, Claire's, Equestria Girls, Forever 21, Gap Kids, The Children's Place.

A documentary about Pimenova aired on RTL Television in October 2016.[8] She remained active for Kids-Tokei, flying to Guilin, China in November 2016.

June 2017, Pimenova co-hosted the Top Mini Models show in the Mercury City Tower in Moscow, broadcasted later in 2017 by the World Fashion Channel.[18] 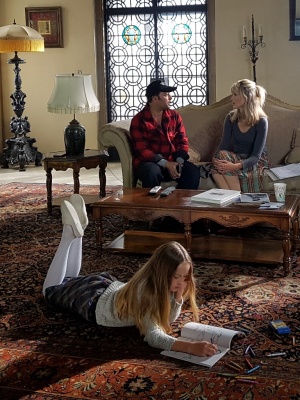 Pimenova played a post-production part as a singing child in the Italian fantasy film Creators: The Past.[19] In her interviews for Elle Kids Russia and Posh Kids Magazine, she expressed her wish to become a professional actress and film director.[17] She has been cast for the role of Dasha in Michael S. Ojeda's upcoming film The Russian Bride, a horror thriller, co-starring with Corbin Bernsen and Oksana Orlan. A 3-minute promotional trailer was published on January 18, 2017.[11] Production on location took place March 2017, in Michigan.[20]

Kristina Pimenova is the daughter of ex-football player Ruslan Pimenov and Glikeriya Shirokova, who studied international corporate finance. One of the teams that Pimenov played for is FC Metz.[9]

Pimenova was born in Moscow, but lived in France with her parents until at the age of three the family returned to Dedovsk, a Moscow suburb. She has an older half-sister, who went to a private school in the United Kingdom.[2][9] When Pimenova moved to California with her mother in 2015, her father stayed behind in Russia.[8]

Despite her work as a model and moving to a new country, Pimenova has not fallen behind with her education[8] She prefers wearing comfortable clothes, reading books, and playing outside with the neighbourhood children after school.[17] Pimenova considers herself an ordinary girl, and is an avid fan of Harry Potter.[16]

At the age of 10, Pimenova had 1.6 million followers on Instagram,[8] and nearly 4 million on her Facebook page,[13] both social media presences managed by her mother.[21] A successful child model, in high demand,[3] Pimenova has been called supermodel and 'the most beautiful girl in the world'.[21]

Critics maintain that some of Pimenova's pictures show adult poses,[7] are sexual and attract paedophiles.[21] Portraits in 'very short skirts and dresses' incite a flood of sarcastic comments.[5] Glikeriya Pimenova denies that some of Kristina's photos are provocative, or that she is exploiting her daughter.[9] She is unhappy with the qualification of her daughter as most beautiful, and stresses that true beauty lies inside.[2][12] Pimenova only uses minimal make-up.[4][5] Modelling normally doesn't occur on school days, and according to Pimenova's agent at L.A. Models, requests that are inappropriate for her age get refused.[8]