Difference between revisions of "Hippel-Lindau disease" 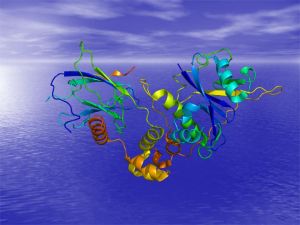 The clinical spectrum of the disease includes, in addition to the affections of the eyes and cerebellum, the occurrence of hemangioblastomas in the area of the brain stem and spinal cord. Next, renal cell carcinomas (risk of disease is 25-45%, usually after the age of 50), pancreatic cysts, pheochromocytomas, epididymal cysts and polycythemia are observed.

Epididymal cyst CNS hemangioblastomas present in the cerebellum in approximately 60% of cases, the spinal cord in 13% of cases, and the brainstem in 4% of cases. Rarely < 1% in the cerebrum. Lesions in the cerebellum become clinically apparent on average in patients at age 29 years and in the case of spinal cord lesions at age 34 years. The diagnostic criterion is evidence of bilateral or multiple retinal hemangiomas or evidence of multiple posterior fossa hemangioblastomas.

Based on clinical courses and differences in phenotype-genotype correlation, two forms of VHL syndrome are distinguished. Patients without a phaeochromocytoma are classified as VHL type I, patients with a phaeochromocytoma as VHL type II. Very different data are given on the course of the disease. On average, retinal angiomas are detected in patients at the age of 25. The retinal angiomas can be treated well if detected in time. The intracerebral and spinal hemangioblastomas can lead to dangerous hemorrhages, especially in the area of the brain stem.